Don’t see what you’re looking for? Email us at marketing@motusgi.com. Let us know if there’s a topic or product that you’d like further information about.

Is the Pure-Vu® system available for purchase?

Yes. The Pure-Vu® System is commercially available in various regions of the United States. With a commitment to provide dedicated support to customers as they integrate the System into their facilities, MOTUSGI is currently limiting its focus and resources to select geographic regions.

Is the Pure-Vu® System available outside of the United States?

The Pure-Vu® System received CE Mark in February 2018; however, MOTUSGI efforts are currently focused on commercialization in the United States. Commercial activities in Europe are expected to start in 2020/2021.

Are you currently using distributors to commercialize the Pure-Vu® System?

MOTUSGI is currently utilizing a direct sales force for the Pure-Vu® System commercialization efforts in the United States.

Is the Pure-Vu® System for both inpatients and outpatients?

Yes. Pure-Vu® can be used for both inpatient and outpatient settings.

What facilities does MOTUSGI currently work with?

A number of major medical centers across the United States are currently using the Pure-Vu® System to clean poorly-prepped colons. For more information, please contact a MOTUSGI representative.

At present, MOTUSGI is not actively looking for additional clinical trial sites. However, if you have interest in participating in an upcoming clinical trial, please contact a MOTUSGI representative. The clinical team assesses clinical needs and identifies appropriate partners for each study.

What data exists to support the clinical efficacy of the Pure-Vu® system? 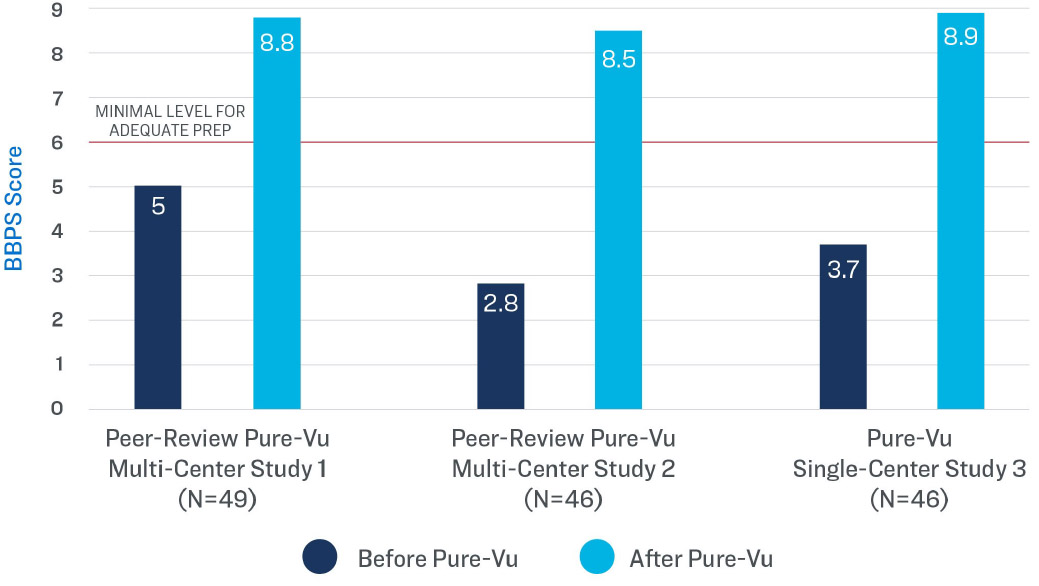 How many cases have been performed with the Pure-Vu® System?

To date, more than 600 procedures have been performed globally with the Pure-Vu® System.

Is there a risk of perforation with the Pure-Vu System?

Three perforations have been reported with the Pure-Vu® System to date. – In the first case, the patient was laparoscopically repaired and sent home within 12 hours. There have been no long-term complications reported. In the second case, the perforation may have occurred during attempted retroflexion, which is known to elevate such risks particularly in a narrow anatomy. In the third instance, the perforation was in an 80-year-old woman and occurred around the sigmoid flexure. These three instances are the only reported adverse events associated with use of the Pure-Vu® System worldwide.

Perforations are identified as precautions within the Pure-Vu® IFU and are consistent with the associated risk for a standard colonoscopy.

What is the difference between the cleansing airflow rates in various modes (High, Medium, Low)?

How much fluid is infused during a typical procedure?

The amount of fluid used to cleanse the colon can fluctuate based on the level of dirtiness. However, on average, procedures use ~1L of fluid.

Does the Pure-Vu® System interfere with any therapeutic procedures?

No. Colonoscope working channel remains patent so standard therapeutic procedure can be performed.

Can I still use CO2 with the Pure-Vu® System?

Yes. Use of the Pure-Vu System does not change your ability to insufflate with CO2. The majority of insufflation in a Pure-Vu procedure is CO2. The air emitted from the Pure-Vu device represents only a fraction of the gas in the lumen. Rapid absorption of CO2 should still take place during and after the procedure. I have not had physicians note discomfort or delay from the air in procedures.

If the colon reaches a certain pressure, does the machine stop administering air?

No. The internal and external sensors deliver a constant air flow. The internal airflow measured by the Pure-Vu® System is used to speed up or slow down the suction pumps.

Can the Pure-Vu® System be used during the colonoscopy when employing the water exchange and water immersion techniques?

Yes. Physicians have found benefit and success with utilizing the Pure-Vu® System during the water exchange and water immersion techniques. MOTUSGI is currently undergoing a single-center study to better assess the utility of our system in that application.

What resources are available to assist with System set-up and procedure support?

MOTUSGI is committed to assisting its customers before, during and after Pure-Vu® System procedures. In addition to a robust inservice program for physicians, nurses and technical staff, MOTUSGI provides hands-on support until customers are comfortable and proficient users of the System. Additionally, an intuitive Helpful Hints guide and instructive video are available for ongoing loading and unloading reference.